FSBC Pastor John Shirey led in the opening prayer.  Wendy Rubio sang ”Christmas Hallelujah” with a video presentation of the message of Christ’s coming.  Janice Adams played a piano solo of a Christmas medley of “The First Noel” and “Silent Night.”  Several people from the congregation attended in support of those participating.

The musical celebration was a wonderful way to celebrate Christmas with the Southern Utah community. Many doors for future ministry were opened through this engagement. We pray for future fruit through this ministry.

If you have news and information about events happening at your church, feel free to submit those to office@uisbc.org and we will consider sharing with others via future updates of UI Connections. 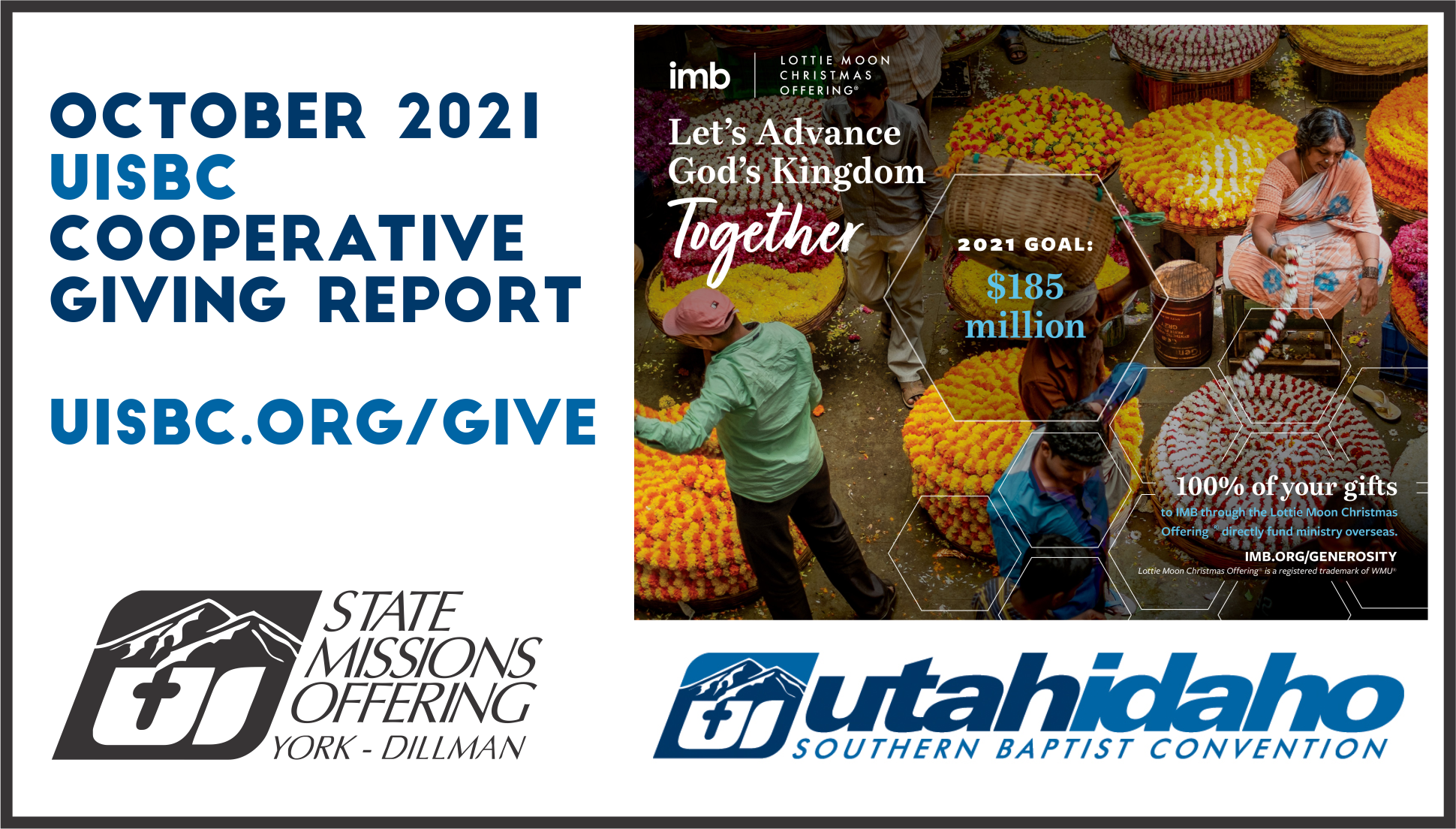 IDAHO FALLS, ID – The members of Falls Baptist Church voted to hire a contractor for the renovation work on the church building on the south side of Idaho Falls in October of 2020.  Although the Covid-19 pandemic had taken a toll on our attendance during that season, the church felt it was the perfect act of faith to renovate the building in the hope to be able to accommodate more people once life began to return to normal.  The actual work began in December of 2020 with the majority of the construction completed in April of 2021.  The renovation allowed us to expand our seating capacity from around 70 to 120.  We were also able to build an infant room for nursing mothers and a new baptistry.  We were so blessed to be able to utilize the skills of Nathan Harden, a Baptist Builders missionary who did the tile work in the new baptistry and built steps and handrail for a new door that was installed so that we could pass our final inspection with the county.  We performed a dedication ceremony on the baptismal on August 15 where the church family gathered around and dedicated it to the Lord’s glory and purpose.  On October, Sierra Heffron was the first believer to enter the waters of baptism in our new baptistry.  It was a very exciting day for the faithful saints who call Falls Baptist their home. 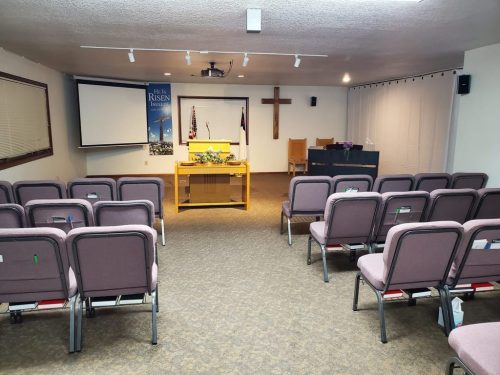 What the Sanctuary at Falls Baptist looked like before construction began 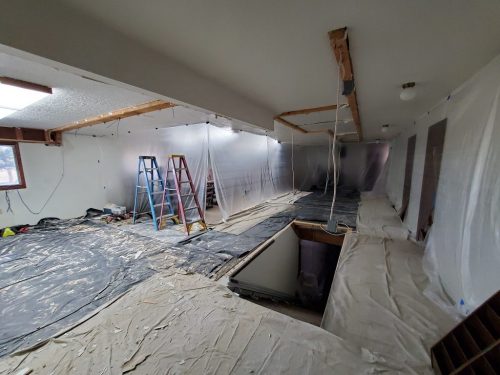 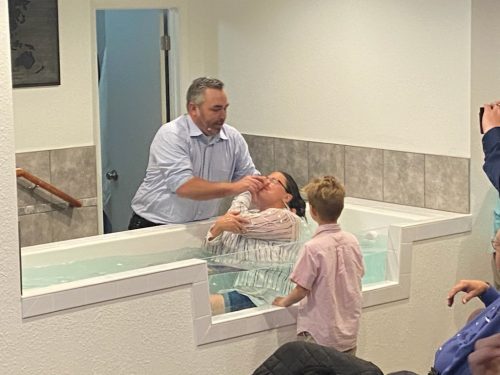 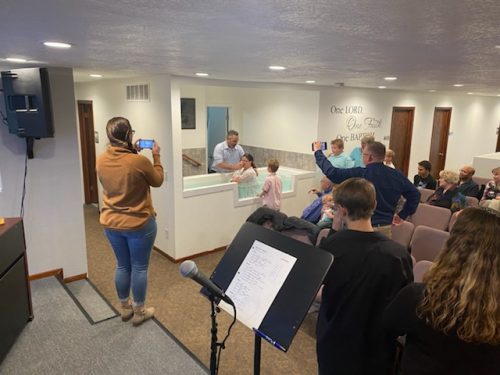 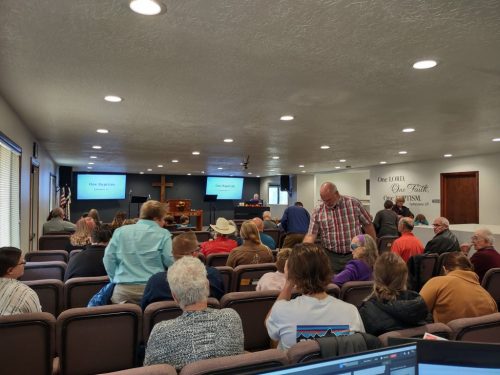 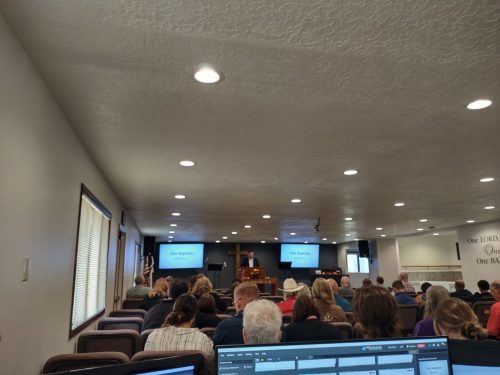 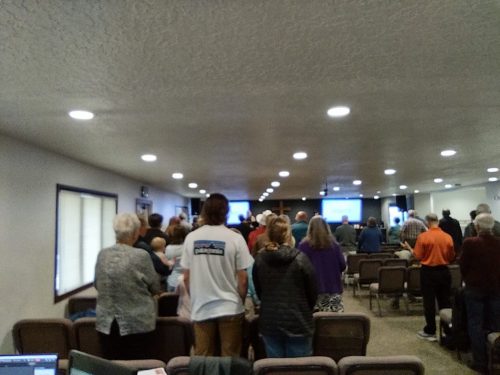 FT WORTH, Texas – During a fall mission trip to the Intermountain West, a team of Southwestern Baptist Theological Seminary students ministered to Christians serving throughout Utah and southwest Idaho, traveling more than 1,600 miles to visit with 34 Christian leaders and their families, October 2-9.

Travis Kerns, associate professor of apologetics and world religions, led the trip. Describing Utah as the most “un-Christian” state in America, he said short-term mission trips to a state with a majority Mormon population are not conducive for “parachute evangelism,” and often do more harm to the relationships and ministry of long-term leaders and missionaries to the area.

Kerns, who previously served as a Salt Lake City Send City missionary with the North American Mission Board, further explained that many pastors in the area not only struggle to receive acceptance from a community generally skeptical of “outsiders,” but often battle discouragement and loneliness as some are many miles away from the nearest Christian pastor.

In light of this, Kerns said encouragement and spiritual investment from other Christians such as the Southwestern Seminary team are essential to investing in Kingdom work in Utah and southwest Idaho.

Master of Theological Studies student Sarah Wester from Princeton, Indiana, has lived in a variety of American cities and has served on multiple international mission trips, but described her experience in Utah as “being in the belly of the beast when it comes to the spiritual oppression.”

As the team met with ministry leaders, Wester said she was particularly struck by how quickly emotions surfaced during their conversations and how they expressed gratitude for having trusted believers with whom they could share their burdens and receive encouragement.

“It became so clear the desperate need for encouragement and fellowship, and for them to feel like they weren’t alone,” Wester said.

For Master of Arts student Brittany Barfield from Tucson, Arizona, the trip made evident the need for discipleship alongside evangelism.

“I think it is an outflow of discipleship that sharing the Gospel comes,” Barfield said. “You cannot have evangelism without discipleship. If we are not making strong disciples, there will be no evangelism.”

Barfield said she was glad to have the opportunity to edify fellow believers as they seek to minister in Utah and southwest Idaho. This type of trip, she said, is a way Christians can support and invest in already existing ministry and work.

“If believers that are there on the ground right now are not being encouraged in any way, they’re going to burn out,” Barfield said.

Kerns said he hopes to lead similar trips to Utah at least once a year and noted the need for faithful Christians to commit their lives to reach the people of Utah with the Gospel, and to support the missionaries and pastors serving in that region. Utah, Kerns added, has an average daily death rate of 54 people, with 53 of those who die without knowing Christ.

“So, the real question about ministry work in Utah is not, ‘why should I go there,’” Kerns said, “but ‘why should I not go there?’”

MERIDIAN, Idaho – Dr. Jeff Iorg, president of Gateway Seminary in Ontario, California, used his four sessions to present helpful lessons from scripture on how we, the church, need to respond to conflict.

In typical seminary form, Dr. Iorg preached each session using one of four different methods of preaching to provide lessons for hearers who were exposed to different preaching methods as powerful tools in our toolbox.

To watch all four sessions, they are available in our 2021 Pastors’ Conference playlist. Be sure to subscribe to our YouTube channel to be informed whenever new content is posted.

We are here to answer any question you may have about our Agency. We will respond as soon as we can.